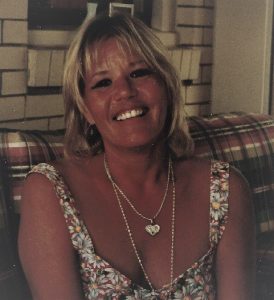 Kathy Jo Kosior-Nelson, age 62, passed away on November 14, 2021, to be with the Lord, following a brief but terminal illness.

She was preceded in death by her parents, Anthony and Jane Sophie (Cwynar) Kosior, in 1974, and her brother, Thomas, in 1956.  She is survived by her husband, David E. Nelson, of Boca Raton, Florida, and brother Jack Kosior (Karin), of New Castle, Pennsylvania, maternal aunts; Clara "Lola" McFarland, Beverly Cwynar and Peggy Cwynar, numerous Kosior and Cwynar cousins, and sisters-in-law, Donna Heller, Kristina Prodouz and Andrea Elias.

Kathy was born on January 9, 1959, in New Castle, Pennsylvania, where she spent her formative years.  She graduated from New Castle Senior High School in 1976, where she was on the cheerleading team.  Kathy attended Slippery Rock University for two years before moving to Boca Raton, Florida, where she attended Florida Atlantic University.  While in attendance, Kathy passed a statistics proficiency test and graduated in December 1980, without ever taking the class!  She had an uncanny ability to recall numbers and dates throughout her life.

After receiving her bachelor's degree in Criminal Justice and being inspired by her Uncle Frank Baranski, Kathy pursued her career goal of becoming a probation officer.  She served as a probation officer in Florida and New York from 1981 through 1988, until her appointment as a United States Probation Officer in April 1988.  She proudly worked in the special offender unit before her retirement in December 2011.

Since retiring, Kathy enjoyed every moment life brought to her, keeping everyone in her life close by regularly arranging "reunions" with her wide network of friends, her favorite activity.   She had a way of making everyone who knew her to feel special. Her smile and laughter engaged everyone she met.  Close friends described her as loyal, tenacious, fun, an avid football fan, and the "ultimate friend."  Kathy read the Bible daily and was a firm follower of the Christian faith.  She will be missed by numerous friends who loved her dearly.

Kathy was eternally grateful to those who visited, called, and prayed for her, and wanted to especially thank the friends who slept by her bedside during the final weeks of her life so she would not be alone.  A special thanks to the staff at Trustbridge Hospice and Banyan Place, in Boca Raton, who provided her end-of-life needs.

Kathy attended Sunday services at the Cross Community Church, 841 SE 2nd Court, Deerfield Beach, Florida, and asked that any donations be made to the church. Kathy requested her friends gather to celebrate her life on a date to be announced. Arrangements are entrusted to Noga Funeral Home, New Castle, Pennsylvania.

"And He will raise you up on Eagle's wings, Bear you on the breath of dawn, Make you to shine like the sun, and hold you in the palm of His hand" (On Eagles' Wings)