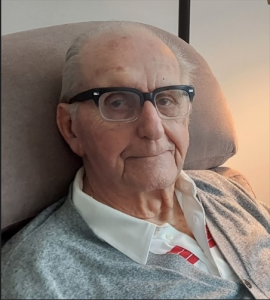 Paul Frederick Steinmetz was born in Cincinnati on November 10, 1927, to Carl and Clara Steinmetz. He was retired from Teledyne and General Electric, where he was a manufacturing engineer for jet engines. He was an avid golfer and enjoyed spending time with his family. He was the beloved father of Sue Kettel, David Steinmetz, Anne Graft, Carol Cornell, and Maria Elfring. He was the admired grandfather of Carey Elfring-Geis, Tony Elfring, Jacob Elfring, James Ranquist, Eric Steinmetz, Ashley Houghtell, Taylor Cornell, Samantha Cornell, and Kelsey Graft. He was also blessed with 6 great-grandchildren. He was preceded in death by his brother Charles Steinmetz and his sister Claire Mersch.

Paul was a veteran and served in the US Army from 1950 to 1952; he was stationed in Germany during the Korean War.

Paul passed away on Monday, August 15, 2022, at age 94 after being visited by his immediate family at Trustbridge Hospice Care in Boca Raton, FL.  A memorial is being planned in November at the South Florida National Cemetery in Lake Worth, FL.

In lieu of flowers, memorial contributions can be made to the Alzheimer’s Association  or Trustbridge